“Stop the car! Grab your guns, we’ve found fresh footprints!” The Land Cruiser’s wheels skidded to a stop and Jasper, Andy and I took our shotguns and dismounted. A pair of lions had eaten nineteen calves in the past few weeks and we were tracking them through the thick Namibian bush. If we found them, we could legally kill them. Lions who have started hunting cattle will not go back to more difficult prey but will continuously come back to eat cows. Jasper and the other farmers in this area already have to contend with a fierce drought and poachers that have been killing off their animals, they can’t allow predators to kill off any more. We followed the spoor- soft, almost unintelligible shadows of footprints in the sand, until we came to a riverbed running under a fence which borders the neighboring farm. On the barbed wire hung a handful of rough, black lion’s mane. The two lions were rare Desert Lions, but as they had wandered into the mountains and off of Jasper’s land, the chase was off. We returned to the Land Cruiser, slightly deflated from the anti-climax yet also relieved that we wouldn’t have to shoot these beautiful animals.

I met Andy a few weeks ago in Cape Town. A Kiwi living in Switzerland, who traveled through all of West Africa with a BMW GS1200. He invited me to come stay with a local farmer, Jasper, near the town of Outjo in Northern Namibia. A couple from England, Rob and Mandy, who have also come down West Africa with a Land Rover, have joined the party as well and together we have had a great week here. During the day we have been tracking lions and leopards, helping with the cattle, practicing shooting at beer cans, getting to know some of the other farmers in the area and driving around the huge farmland. At night we set up a camp in the middle of the bush and cook massive feasts of brisket stew, mince with pap (a salty, maize porridge), curry with rice, Oryx schnitzel with pumpkins or oysters wrapped in bacon. We sit around the fire, each with a cold beer or a gin and tonic, and listen to Jasper’s stories.

Jasper is a remarkable person, a gentle giant with a pure heart who is a natural-born story-teller. He was in the military, worked in construction and now manages three farms and is a professional hunter, taking out wealthy clients to stalk and shoot game. He told us about the history of the town of Outjo; Jasper’s great grandfather-in-law followed a local Herero man from Windhoek who promised him that hidden in these hills was a spring. After staggering around for weeks, and on the verge of death, he was about to give up when his guide shouted “Outjo!” which means in the Herero language “Look here!” and lo and behold! There was a fountain which provided the groundwork for the town which sits there today. Jasper also told us about some of his more interesting hunting clients, amongst them the King of Spain, a white American who insisted he was half Indian and ate raw Springbok liver while howling at the full moon, a Filipino who crapped his pants when he was met with a charging lion and a South African who, while approaching a leopard in a trap, bent down underneath a bush and stabbed himself with his own arrow. 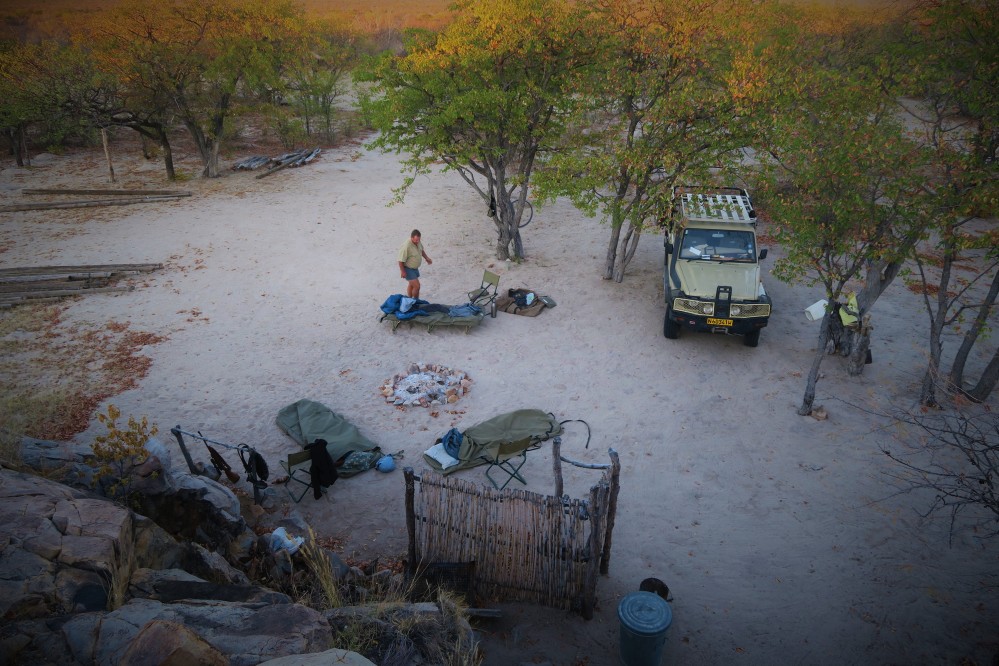 Jasper has also helped me develop my confidence riding the bike greatly. The evening I arrived at the farm, I crashed 10 meters into the gravel road leading up to his house. After my accident in Sossusvlei I was so psyched out that the whole way there on the tar road I kept repeating to myself “just be calm, just be calm” in increasing volumes of panic. Of course I fell the second I hit the gravel, it was inevitable. I took off all the gear from the bike but I still couldn’t lift it up. I was almost crying with frustration. Just another mid-ride crisis. One of those moments when you almost break and then the other voice in your head says “Come on, stop whining and making a fuss. Make a plan, find a solution.” Jasper and Andy came to my rescue and two evenings later we went for a long drive of 70 km on gravel and sand, Jasper following me in the Land Cruiser. I concentrated on keeping calm and relaxing my arms so that I wasn’t griping the handlebars and fighting with the bike. I did have one moment of sheer terror when a huge Kudu jumped out of the dark and missed my front tire by a millimetre. I was so taken by surprise that I didn’t even have time to slow down. But aside from that I had a great time, learning to let the bike “dance” in the sand and then pushing it forward so that it runs on straight. Now listen carefully- two tips for winners which will absolutely make you a pro in off road riding! Number One: Imagine you have no shoulders. Absolutely none. Keep your body forward and your weight off your arms. Number Two: Sing “I Believe I Can Fly!” as loudly as possible. Seriously, it helps. 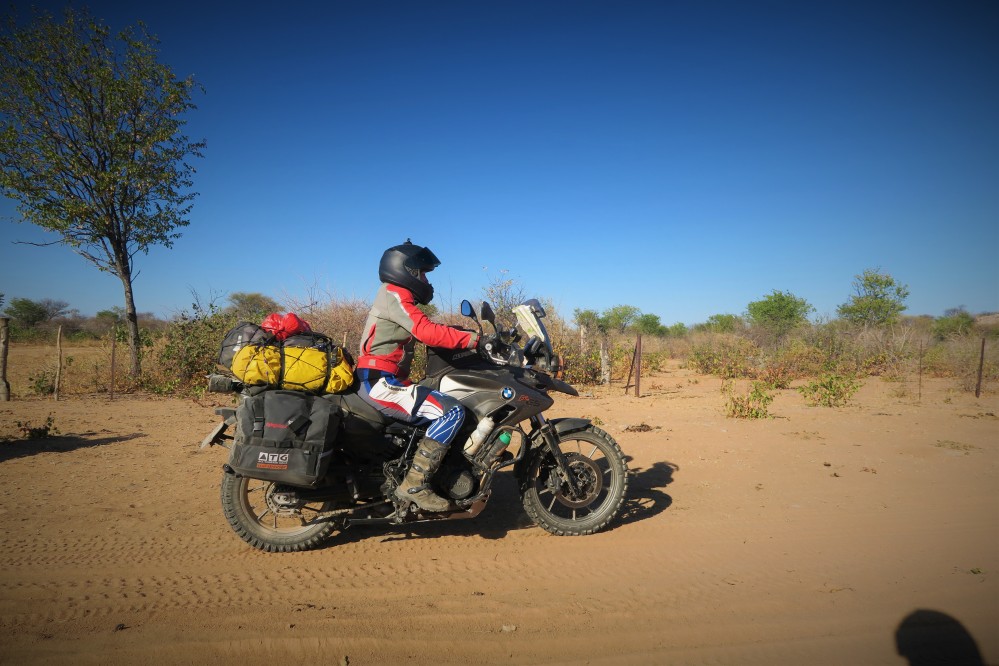 On another one of the days we went to look for two wounded zebras that were shot by another farmer in the area. The shots were not well placed – the zebras were now in great pain and their death would be a waste if we could not find them. As we walked in the mountains, finding trails of blood on the rocks, we talked a lot about the difference between a killer and a hunter. Jasper does not enjoy hunting. He and the other farmers in the area hunt game in a controlled manner only for meat for their families and the families of their workers. He hunts predators who threaten his livestock and takes clients “trophy-hunting” in concession areas in order to earn money to provide for his family. The hunting is well-controlled by the government so that older, sickly animals are killed. Most of the huge amounts of money that are paid to hunt these animals goes back into their conservation. (Of course, this system is not full proof and there is also abundant corruption.) Jasper spoke of the ethics of hunting – killing for “moral” reasons, stalking prey carefully on foot and shooting from short distances only, as well as making sure you take shots that will not leave the animal wounded and in pain. It seems a bit more ethical to get your meat in this manner than to be oblivious to the process by buying it pre-packaged and wrapped in plastic from the supermarket.

These farmers lead a rough life, which in the past few years has become even tougher. A drought has left the land completely barren and dry. Rare green leaves peek out from grey, thorny bushes that stretch for kilometers. Watering holes are empty and cows wander around tiredly, their bones poking out of their skin. The farmers have no option but to sell their cattle for slaughter, as they will die anyhow. The huge influx of cattle means that the price per head has gone down dramatically and the farmers are paid a pittance. Aside from that there are also poachers who hide on their land and hunt their game and cattle. We walked up on one poacher camp, full of skulls, dried skins and pieces of thin metal sharpened to serve as knives. One of the challenges of prosecuting these poachers is that farmers tend to be white whilst poachers are generally black. Justice is not color-blind and race is an issue in Namibia. 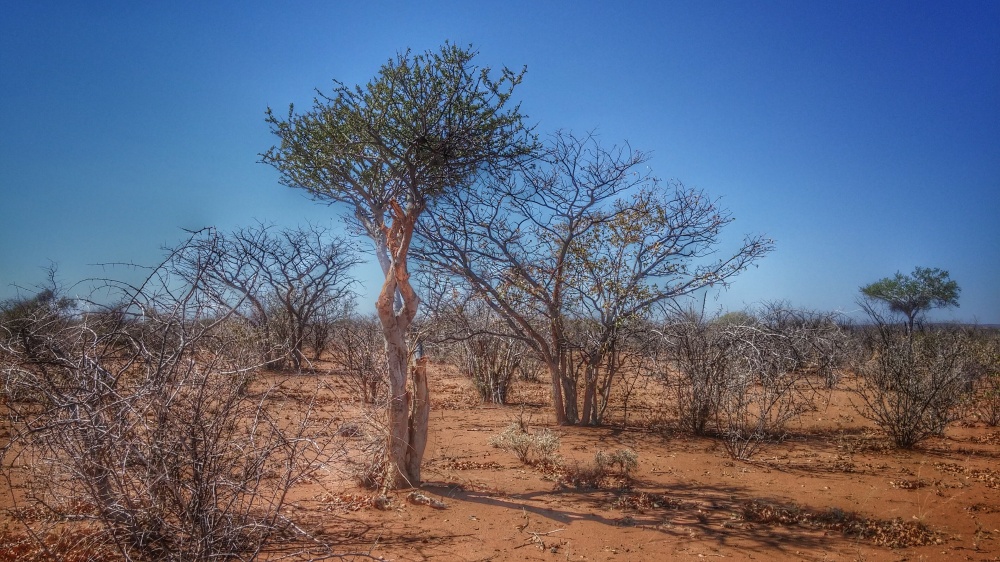 It is a difficult subject but I would like to try and say a word about it. When you speak to a farmer whose family has owned land for five generations and suddenly the government wants to take it away to redistribute it to locals, Affirmative Action seems a bit unfair. They have built these farms, and it is hard to claim that if the white settlers hadn’t come along the black locals would have built it themselves. For example, Ethiopia, which has never been colonized, can’t assert that it is far more advanced than its colonized neighbors. Other African countries which have thrown out white settlers haven’t fared better without them (Angola, Mozambique), and South Africa is, according to some, going quickly downhill as the economy worsens and corruption increases. On the other hand, there is an undeniable inequality between whites and blacks. The black bushmen on the farm ride in the back of the pick-up, do all the dirty work and always sit apart. Blacks are much more likely to be uneducated and poor. They are always the maids, cooks, waiters and gas-station workers. The thing is, there is no such thing as justice. It is impossible to correct historical wrongs and it is high-minded to think that equality exists anywhere in the world. I am not making a stand, taking a side or voicing an opinion, only trying to ponder a bit of the complexity of this country.

This week has been amazing – having the privilege to be a guest in someone else’s day-to-day life which is so different from what I know and meeting kind and inspirational people. Even if it is for a week, it really does feel like family.