You know how when you first hear a new song the first day you are very excited by it. “Wow, that’s a pretty nice song.” On the second day you replay it 368 trillion times in a loop, make all your friends listen to it and go around shouting “Best song EVER!”. And then on the third day you can’t stand it anymore and don’t want to hear it ever again? That’s just another way that Rwandan roads are like music. They sort of wear on you.

Crossing over into Tanzania the change was immediate. From the endless steep hills of Rwanda the landscape opened up into gently rolling hills. No switchbacks, no sharp corners. Straight roads that cut up the hill and down on the other side. The scenery changed into dry, yellow bush with occasional acacia trees and some green shrubs. Tanzania has been quite an experience.

(Please sing to the tune of Twelve Days of Christmas; “On the first day of Christmas my true love sent to me lalalala)

On my first day in Tanzania a motorcycle drove into me! A boda-boda driver tried to overtake me and as he was going me he brushed against me with the side of his handlebars. The motorcycle lost balance and started fishtailing wildly. I put out my foot, gave it some gas and it straightened up. I just kept on driving, I was so flabbergasted to be okay. Damage: One lightly twisted ankle, one slightly bruised ego. That night I slept in the small town of Biharamulo in northern Tanzania. The next day I drove on to the town of Tabora, bravely going forward into the unknown. I was trying to find a way south, avoiding the atrocious gravel road along Lake Tanganyika by taking a route that cuts straight through the middle of Tanzania. I only had dodgy local advice attained by pointing at the road and then giving a thumbs up and a thumbs down and trying to see the reaction. Obviously, my pantomime skills need improvement.

On my second day in Tanzania a truck driver drove into me! Now this one really is my fault though. On a rough section of potholes I decided to use the obvious advantages of my graceful and lithe motorcycle to overtake. I should mention here that Tanzanian roads have no shoulders. Just as I was about to pass him, the truck driver veered right, right into me and pushed into my saddlebags, again sending me fishtailing and bouncing until I managed to regain my cool and drive off unscathed.

I had begun the day’s riding with a terrible, intense pain toothache. I could feel my mouth physically throbbing. How the hell will I get through the day’s driving like this? After two hours of this misery I stopped and had a serious talk with my body. Man Up! This is not the time to get sick. In two months when I am back home, you can be as sick as you want – fever and everything. For now, body, you are going to feel fine!” And so it was! The victory of mind over body.

That day I also had another test of my pantomime skills. Around lunchtime I stopped at a small kiosk. At once a crowd of kids surrounded me as I tried to explain to the girl behind the counter, using my best finger-pointing skills, that I wanted something to eat. Eventually I acquired two bananas and two hard-boiled eggs. With no way to understand the cost I surrendered a 5,000 shilling note and drove off. Now began the difficult task of finding a place to stop. A place that has shade, but no people around to stare at you, that is easily accessible with the bike and that I manage to spot from a distance. Finally, finally I diverged from the road and parked under a small tree. Happily I took out my lunch – only to discover that my two “hard-boiled” eggs were not hard-boiled at all and had exploded everywhere in a gooey mess. Luckily I had two half-rotten bananas to stave off my hunger till dinner.

The road to Tabora was a pleasant surprise – 400 km of awesome tarmac that I could zip through at 100 kph. It has taken me a while, but I have finally discovered that one of the best ways to improve your relationship is by getting a pair of ear plugs. Me and my motorcycle are doing much better these days when I don’t have to hear her (engine) whining.

Concerning the road from Tabora south – I had received every single answer on a scale of “It’s absolutely horrible!” to “It is all tarmac except for a few stretches of off-road, but good-quality off-road” Yeah…it wasn’t tarmac. It was 570 km of good off-road, though! So the next day I set off, not knowing what was in front of me but just accepting that I had to get south, just go through it. Man Up! And I did. Riding off-road for me is nerve-racking because of the amount of concentration needed to choose the best line, try and constantly evaluate the road in front by tiny shadows on the ground and the shade of the dirt. Is it sand? Is it corrugated? Small slippery marbles? And always I am nervous about dropping my bike. It is just a mistake that I can’t afford to make. Especially on that route which had so few people along it. I knew that if something happened I would be okay – I would figure it, find a solution. But I did not want to try and test that.

At last I arrived at the town of Rungwa – three shacks instead of two which is what clearly distinguishes it from just a village. After wild waving of hands and fingers and saying the word “petrol” at least 10 times, I refilled my bike and asked for a hotel. A hand was pointed in a general direction and there I drove. Suddenly I spotted a brown safari jeep and a few white guys drinking a beer at a small pub. If the bike could have screeched on the gravel, it would have. I jumped off the motorcycle, relieved to find people who speak English and introduced myself, asking for help to find a place to stay. Turns out that they were rangers working in the nearby Rungwa National Park. Very kindly, they invited me to pitch my tent in the park Headquarters. And thus, I was taken in by the kind park rangers and lived happily ever after. I mean, it did feel like a fairy tale to me.

It was very interesting to talk with the different people at the Park Headquarters. Amongst them were about 20 rangers in a training program on field skills run by an American organization. Of the 70 rangers in the park, about 14 are female. Their main tasks are combating poachers in the parks by mounted and dismounted patrols, armed with AK-47’s. Aside from them there was also a lady from the Wildlife Conservation Services who, together with a technical manger, were going through the national parks with two detection dogs and their handlers to train rangers to work with the canines. Turns out that they had even had some training by Israeli Intelligence Units on ways to gather and use information to prevent poaching. The entire experience was extremely fascinating. It also felt good that I had taken a chance, gone alone into this vast area of central Tanzania just hoping, knowing that it would be okay.

On my fourth day in Tanzania I packed up my things from Rungwa, said goodbye and left towards Mbeya. Again, the only information I had about the road was “Safi” (meaning in KiSwahili “okay”) and “It might be worse than yesterday’s road”. There were 320 km separating me from the security and certainty of tarmac roads. Most of the way was fine, gravitating between smooth to extremely rocky, but all very ride-able. One section turned into deep sand, the thing of my nightmares. Ever since the Terrible No Good Salt Pans of Botswana I have been terrified…no, wait that sounds too dramatic. I have been scared, nervous about sand. But if there is one thing I did learn it is that once you commit – you have to go through with it. If you want to waddle slowly through the sand, that’s fine. But if you have already entered at speed, you have to continue with the momentum. If you try to slow down or brake you will lose control. It doesn’t have to be break-neck speed, just as long as there is enough forward movement to keep the bike going through. It was another Man Up! Situation. No time to panic, I had to switch my brain off and just keep moving forward. 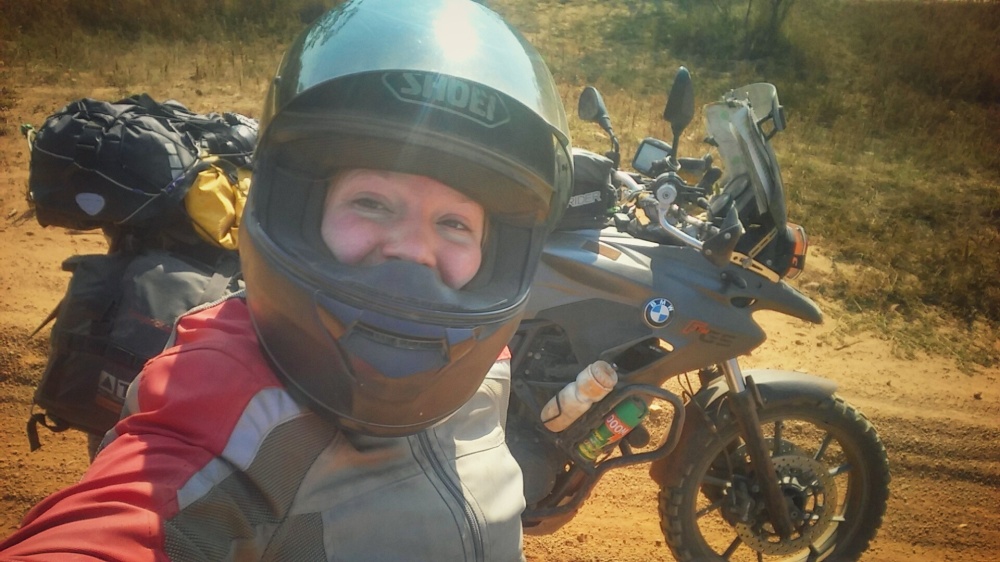 I feel ecstatic! 600 km of gravel, sand and mud behind me. There were times on this journey I never thought I would be able to do that. I have also discovered new-found mechanical skills I never knew I had. After discovering some very minor little issues on the bike (varying chain slack at different turn of the wheel, a tiny leak from my front tire) I figured out the best way to fix them all by myself. Just ignore it. Tonight I am sleeping at the ICC (maybe not the best place for an Israeli to stay…) Hostel on the outskirts of the city of Mbeya. It actually stands for the Ifisi Community Center, run by Swiss Missionaries. Tomorrow I will cross into Zambia, sailing off into the horizon.