Rwandan roads are like music – curve after curve in the road swinging you out and around, another wave of joy, lulling you into a trance, so mystical, so right. From one side to the next. Bend right, bend left. Swing low, towards the ground. Don’t let go – don’t change the angle of your curve, don’t sway the handlebars. Stay on it, stay true. Master the throttle – at the exact pinnacle start accelerating out of the turn, pressing, pressing – and you’re out! Like the sweetest melody that never stops. Singing is allowed and encouraged.

Lake Kivu is a farting lake, one of only three in the world. Over the course of history its deep internal bowels have erupted into a vaporous, invisible mushroom-clouds of carbon monoxide and methane, killing everything around it as evidenced by scientists’ discoveries of periodic extinctions around the lake. There’s no way to predict the explosion. It is interesting however that the same toxic potential of the lake is also a possible source of energy. A methane-extraction plant has began producing power, becoming the nations’ most vital source of energy.

On the northern shores of the Lake is the beautiful town of Gisenyi. The town hugs the border with Congo, the presence of soldiers creating a dissonance with the ease of the town. Huge gates flanked by vine-covered brick walls hide immense villa’s right on the water. Magical trees overshadow the side-walks – trees made of intricate intertwining branches, trees covered in long green overhanging beards floating in the air, trees that start with thick trunks and dark bark and at their edges turn into cacti arms with delicate small green flowers. Palm trees covered in moss, tall and straight, opening their heads towards the sky.

I wandered around along the beach and inevitably thought about the Genocide. The immensity of the horror itself seems too large to comprehend. So I try to wrap my head around certain images, imagine a specific scene. I try to picture blood on the sand where I am walking, bodies in the ocean, try to grasp what happened here only 20 years ago.

There have been many genocides in the course of history, most of the worst happening all in the space of the last 100 years. All genocides have in common the core cruelty of human beings, the fact that regular citizens can be brainwashed and led to believe in so much hatred and act with such violence towards other humans. But every racial extermination has its own shade of repulsiveness, its own complexity. In the Holocaust the robotic, methodical way in which murder was executed in gas chambers was inhuman. In the Rwandan Genocide the animalastic, brutal way that death was dealt out with machete blows, was equally inhuman.

In Rwanda the social aftermath was exponentially complicated by the fact that perpetrators and victims had to return to live side-by-side. Can you imagine living next to a person who you had trusted for years and then had betrayed you and butchered your family. Can you imagine living next door to him, seeing your family’s’ murderer every single day?

Perhaps to move on there are two things needed: Admission of guilt, a plea for forgiveness by the offenders and acceptance, willingness to forgive by the victims. An interesting form of judgement was implemented in Rwanda in order to seek justice and deal with over 1,600 criminal cases. Communities presided over by traditional chiefs tried their own. In return for admittance, the guilty party’s sentence was reduced to half, carried out through community service – the building of roads, cleaning of garbage and so on. In testimonies of the Genocide survivors it seems that they were less interested in revenge or righteousness – no sentence can change the past – and more interested in the truth, so that they could have closure and answers to unsolved questions. Where are my children’s bodies buried? What happened to my mother? That is far more valuable.

And of course a strong, moral society is needed – one that does not deny or lie about its ugly past but assumes responsibility. What perhaps makes Rwanda so strong is that before colonization they were a peaceful kingdom living together inside the same borders as today for hundreds of years – the KiRwanda Kingdom. They had that common history to lean back on and define themselves again after the Genocide not as Hutu or Tutsi but as Rwandans.

The streets of Kigali are infused with a sense of hope. Everything seems to be improving – roads are being built, education is being improved, there is little to no corruption. Ziv, my friend who hosted me in the Masai Mara, rode through northern Zaire in 1994. He told me that the roads were lined with thousands and thousands of refugees escaping the Genocide in Rwanda, so that he could barely ride through. He described the scene to me – people everywhere but all eerily silent, with haunted faces. So much has changed since then – kingdoms rise and kingdoms fall. Who would have believed that this ransacked poor country would rise to where it is today.

Rwanda still faces dire security threats from its unstable neighbors – Congo and Burundi. It is a small country with no natural resources that relies heavily on international aid. The country understands that it must invest in creating an intelligent and innovative workforce which will be able to compete as a tech-savvy nation. I feel that there might be similarities between Israel at its beginnings and Rwanda of today and can only hope that they manage to maintain their unity and positive progress.

It is also interesting to say a word about Paul Kagame, the President of Rwanda. After an overwhelming 98% win in the public referendum, the constitution was altered to allow the President to serve a third term. Ex-pats describe Kagame as a “Philosopher King” and a “Benevolent Dictator”. He is indeed a compassionate and competent leader, however, he has held power for a long time. The Rwandans I spoke to stated with some legitimate frustration that the West has no right to stick its nose in and demand a change of rule in the name of “freedom of speech” when a genuine vote took place and the Rwandan people declared clearly – they want Kagame!

(On a personal note – if he keeps making roads like these he can have my vote too!)

About poverty and traveling in third-world countries. There is nothing romantic or novel about impoverishment. The West tends to see developing countries through Peace-Corps rosy glasses, African children huddled around you makes a great Instagram post. But between drop toilets, cold bucket showers and no flooring versus flush toilets, hot showers and parquets there is no competition. The choice is clear. So it seems a bit – hypocritical, arrogant maybe, to come to these places and play pretend for a while and then to fly back home to our luxuries. People in Africa have been pulled into the race of modern life – they want the fast car, the iPhone, the plasma TV. But they are at the bottom of the food-chain, they hardly have a chance.

I feel as though no National Geographic pictures could make it seem to me adventurous or exotic, the dabbling in White-Savior-Syndrome. I do not like the filth, the smoke and stench of wood-fires, or to see barefoot starving children any more than I did before. Do you know how to tell apart the poorest of the poor? When all their clothes are brown – pants, torn over-sized jacket, ripped coat – all the exact shade of brown. That is the shade every single color takes on after being worn for years. And that is heartbreaking. But I can’t help it, I prefer staying at a place with running water and electricity. I don’t want to stop to haggle with women in wooden stalls selling one wrinkled onion and two green tomatoes. I am riding through her village on a motorcycle which costs more than the building of a four-bedroom house here. Who am I to haggle over a few thousand shillings? I feel conflicted, pained, cynical. Please, tell me how to fix the world and I will, I swear. 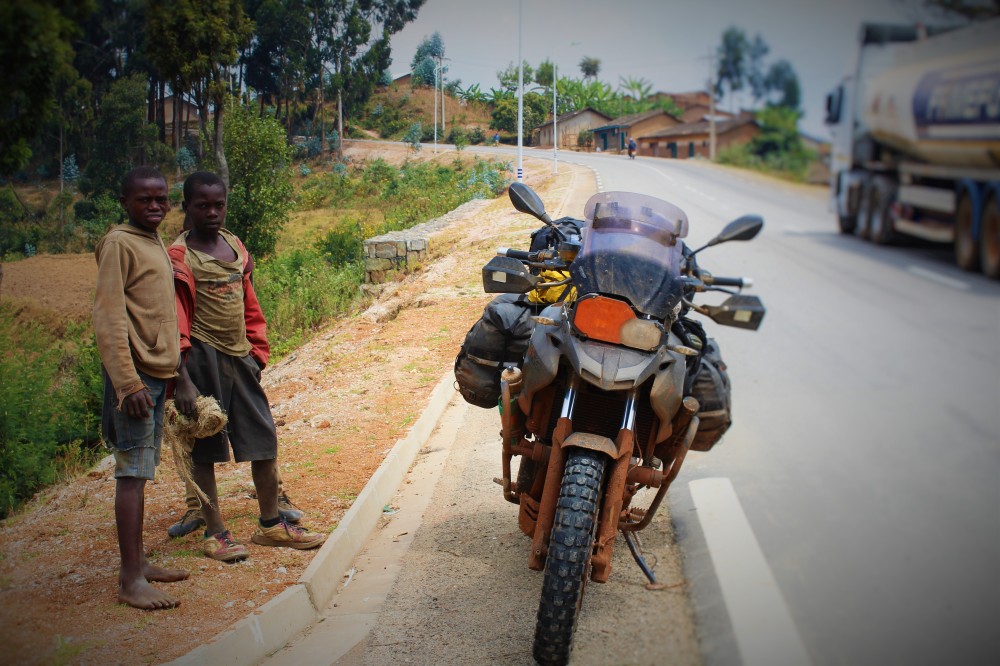 From Kigali I drove into Tanzania. The border crossing went very well but I was taken aback by the poor state of the road on the Tanzanian side. I was planning to ride to Kigoma, on the shores of Lake Tanganyika – 380 km of good gravel road, and then figure out what to do from there. Heading south from Kigoma is a 600 km gravel road which I had been warned is very rough. The exact quote, backed up by several people, is: “…absolutely atrocious – gravel and sand, potholes, dangerous traffic, dust, etc. Avoid at all costs!”. So I was considering my options, perhaps to head back from Kigoma the same way and find a different rout south. It was around three in the afternoon as I turned off the tarmac and begin riding the gravel road towards Kigoma, not knowing where exactly I could stay the night. And then after 20 kms I just stopped and though to myself – “Hey! Wait – I don’t want this. I don’t want to ride all this just to ride it back. Just in order to spend a day on the Lake? Just in order to prove I can do it? I can do it. But I don’t want to.”

So I turned around. Rode 80 km to a nice hostel in the town of Biharamulo. And now I am driving south quickly. I am anxious to get south as elections are being held in Zambia on August 11th. There has been rising tension and two people have lost their lives in the ensuing violence. So I am going to ride hard The thing with African roads is – you just can never tell how they will be. Today I drove 470 km of great tarmac. Let’s see what tomorrow will bring!