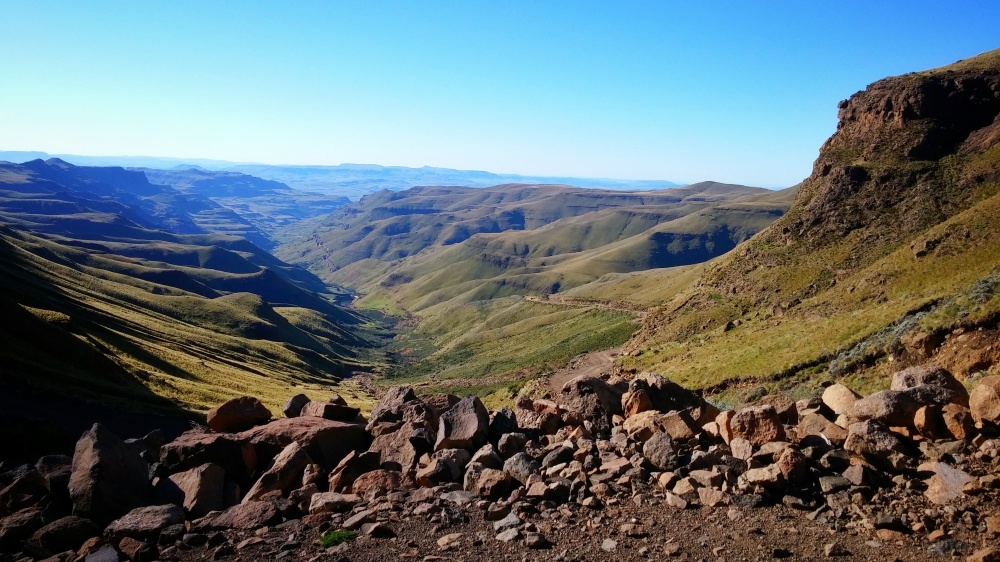 “The route up Sani Pass starts at 1544 meters and climbs 1332 vertical meters to an altitude of 2876 meters. The road is a steep gravel road with gradients up to 1:3, which can be difficult to drive in bad weather and may be covered with snow and ice in winter. By South African law only 4*4 vehicles are allowed on the road. The pass lies between the border controls of both countries (South Africa and Lesotho) and is approximately 9 kilometers in length. Caution must be exercised and drivers or riders must be alert while navigating the pass as it has claimed many lives. Occasionally the remains of vehicles can be seen that did not succeed in navigating its steep gradients and poor traction surfaces.” 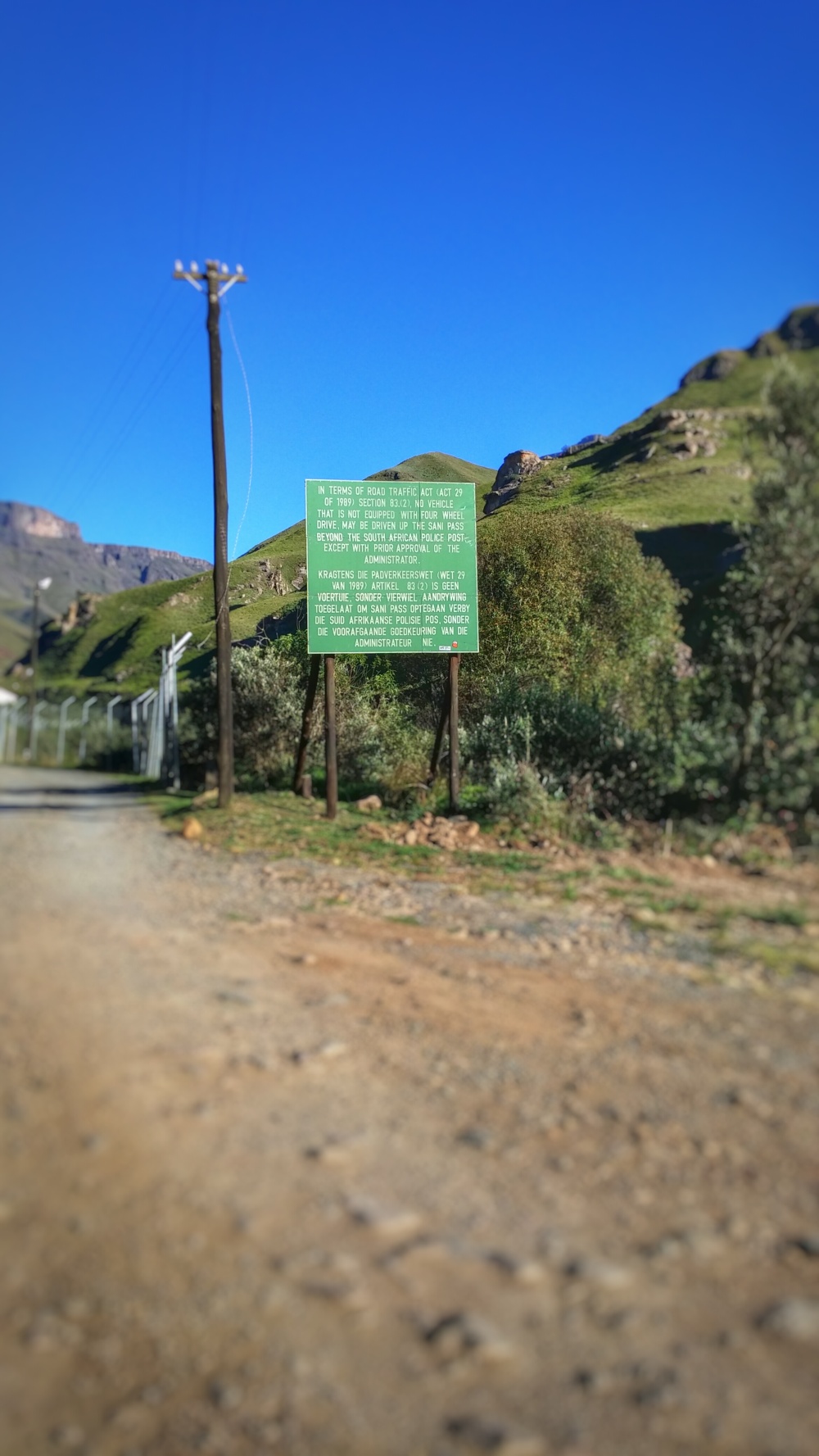 Well, there you have it. All my excuses lined up and ready to go. No, no I’m just kidding. On Saturday morning I decided to attempt the formidable Sani Pass. After deliberation with several riders who know the area I opted not to continue into Lesotho but rather to climb up and down Sani pass in one day and then continue around Lesotho’s perimeter the following day. 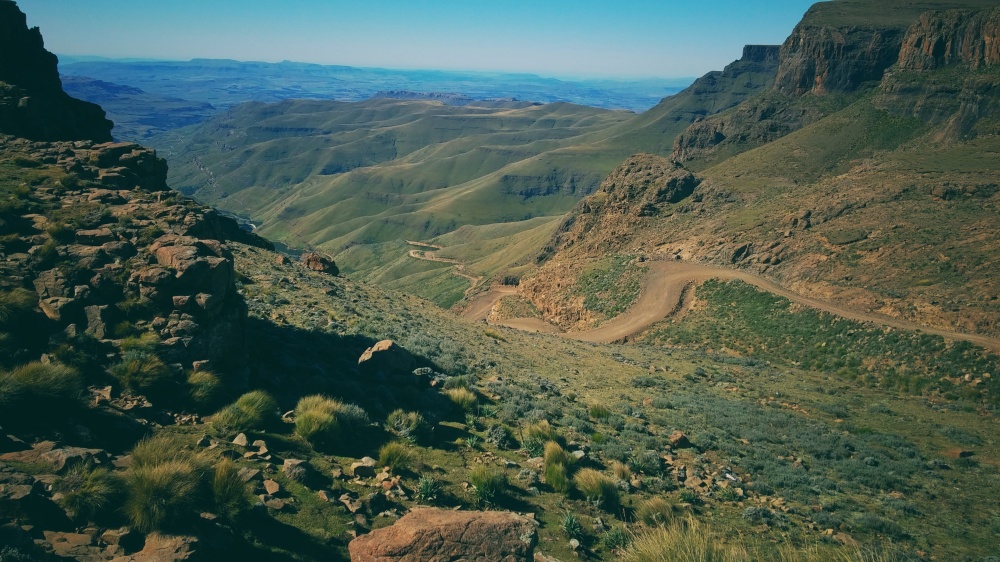 The drive up Sani pass was difficult. The drive down Sani pass was a hundred times more so. I set out early in the morning and arrived at the first section of gravel at about 8 o’clock, dutifully letting out air from my tires and turning off the ABS and Traction Control. The pass is made of three parts essentially. The first is an easy 13 kilometers up to the South African Border Post. Secondly is a pretty simple section which is not very steep and takes you higher up into the mountain. The last 500 meters are the most difficult. Hairpin turns, steep angles with loose gravel. On the second or third switchback I took the inner line instead of the outer and went down. I tried to lift the bike but it just wouldn’t budge, though it was without the panniers or any extra gear. I settled down to wait for help and sure enough, a quarter hour later, a group of four KTM riders happened up the pass and stopped to help me. I fell once more on the climb up but quickly managed to pick up the bike myself and carry on. It felt great to make it to the top! 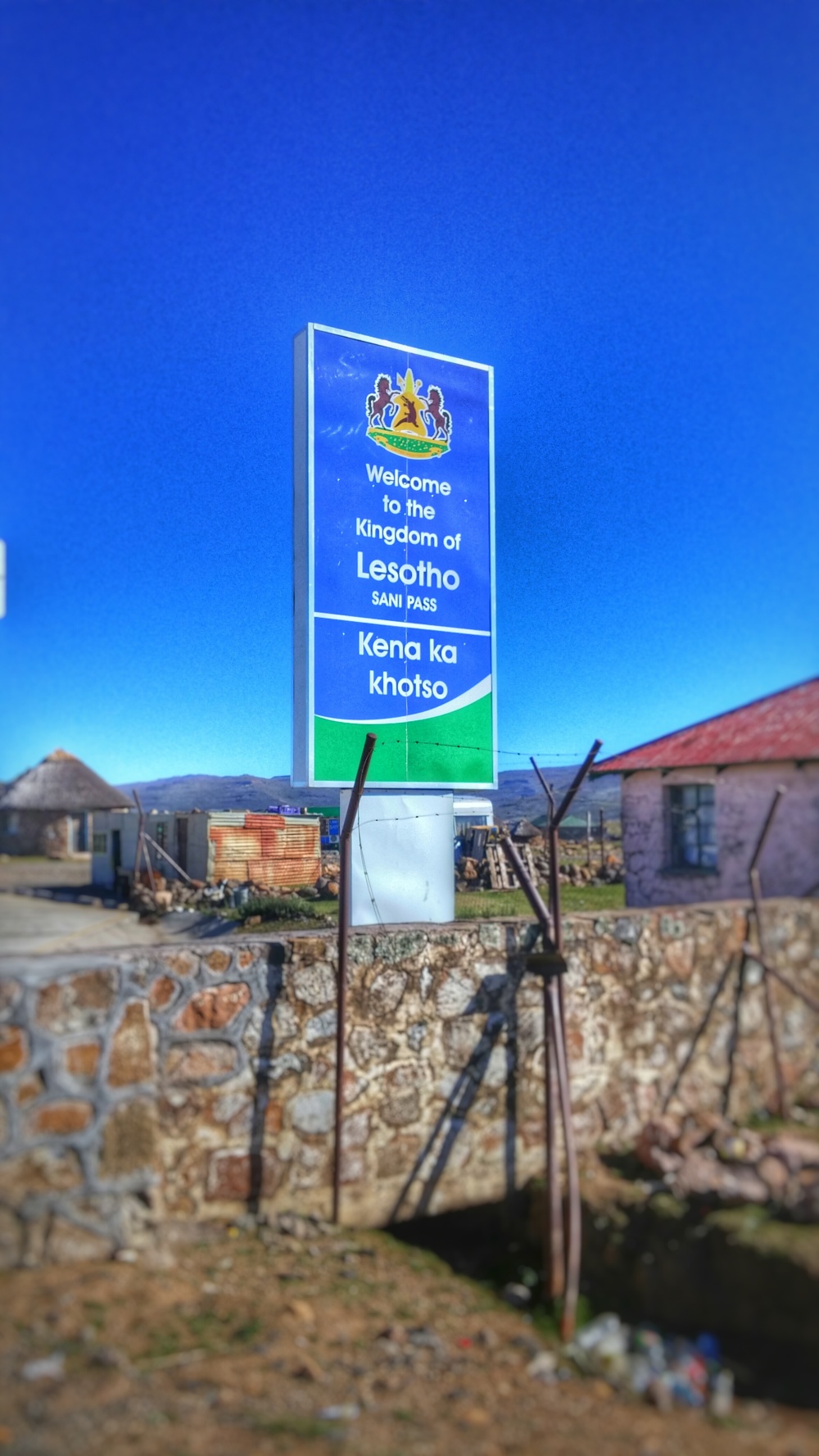 I went driving inside Lesotho, a unique country set high up on a plateau swept by freezing winds, its people swathed in huge black blankets, herding sheep by the side of the road. When the cold finally got to me I went back towards the border post to the Sani Lodge Pub, the highest Pub in Africa (or so they say). There I met a couple who had come to the area for the weekend from Pretoria. We struck up a conversation and they very kindly offered to drive down with me. I was very lucky they did. The angle of the road going down was so steep, and the rocks so loose, that instead of “riding” the bike I slowly waddled down, feet down in order to straighten myself if I lost balance, in first gear, going painfully slow. It was gruesome. My shoulders, arms and fingers were aching like hell. The bike fell about five times, but thankfully I had help getting it back up. The F700GS is difficult to ride off-road because it has a very long first gear, meaning that there is no play with the clutch. But finally, finally, I made it back!

On Sunday morning I lazily took my time and then got on the bike and drove from Underberg to Clarens. The road skirted the Drakensberg mountains and then took me through the Golden Gate Highlands National Park, so called because of the plains of yellow grass and the golden light reflected by the sun on its huge sandstone blocks. The scenery was beautiful and the roads empty and smooth.

Today I drove from Clarens to Burgersdrop, almost entirely completing the external perimeter of Lesotho before I head down to Jeffreys Bay and the Garden Route. I was feeling a bit down these last two days, a bit lonesome and worn out. The burden of making decisions lies constantly on me – there is no one else around to share the load. And I feel myself having to deal with a never-ending circle – where do I refuel? Where do I eat? Where do I sleep? And once the answer has been answered I immediately have to start over again. It is very nice that I have just had lunch, but what will I do for dinner? Do I need to buy food now? Will I cook or will I be in a hotel? The same goes for accommodation. The worry about where I will sleep for the night begins at 10 in the morning. I am wary of letting my guard down, knowing that one mistake could cost me. I feel that I don’t have the privilege of doing that – I am still preoccupied just with survival. But then, am I a “bad” traveler? I do not want to be just counting down the kilometres every day, or to hole myself up in hostels without seeing a soul. The balance is hard for me to strike.

My strategy to get out of these moods is to make a plan and focus on practical matters. I have a plan A, B, C and D that I go over to reassure myself that there is no need to worry since I have so many options. I end my days relatively early and try to ride slowly and stop for pictures and picnics along the way. I think, I hope, that this is a learning process. Also, I bought myself chocolate. That seemed to help the most.

Tomorrow I will be arriving at Jeffreys Bay and I’m planning to take a rest day there to surf and another in Mossel Bay/Hermanus to sand board and go cage-diving with the Great Whites. And then to good, old beloved Cape Town to recharge and reload before the real adventure begins – Namibia and onward into Africa!