Today is already day five of my journey!

On Thursday morning I completed some more bureaucratic duties – getting a police clearance and a Carnet de Passage. Both required finding loopholes inside Catch-22 laws, frustrating and long but fortunately I had lots of help from Duncan, Uwe and Elaine who works for the South African AA. All this is for getting into Ethiopia – I hope it’s worth it! Luckily, by afternoon Uwe and I were on our way from Bellville, right by Cape Town, towards the heart of the Karoo. We got on to Route 62, South Africa’s equivalent of America’s Route 66 and drove up until sunset when we made it to Barrydale. The view reminds me of Monument Valley and the area of Utah – so beautiful I can’t decide if I should look at the road or the view! We slept at a nice Backpacker’s and chatted with the manager, a devout Christian who had some strange prophecies involving the destruction of mankind, digital chip implants inside humans and all kinds of other conspiracies. 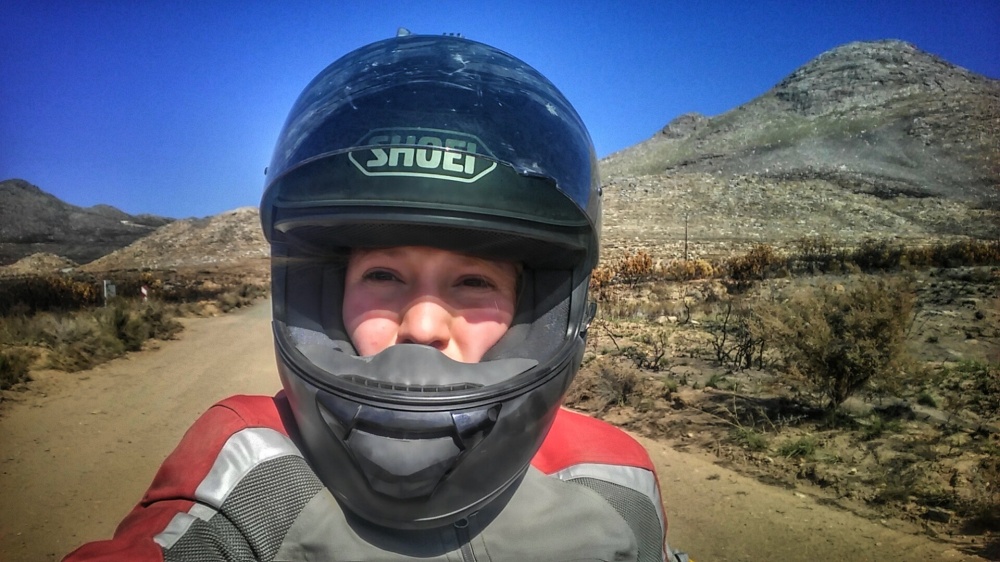 The following day we woke early and rode towards the sunrise. On the way we saw zebra’s and stopped to pet them. We snacked on some protein bars, released air from our tires and started climbing up the Roiberg (Red Mountain) Pass.

The pass is fairly technical but not very difficult. I fell once because I very stupidly took a sharp turn in second gear and the engine stalled. Then again, there is no such thing as a smart mistake to make. That was only the first fall of the day. My second spill came when I took a turn too quickly and lost balance. No harm down though. The bike feels absolutely amazing on the gravel, smooth as butter. We stopped for a late breakfast at Calitzdrop and I felt I had to try the strangest thing on the menu – a bacon and banana sandwich. Actually, quite good.

The next section was the Swartberg (Black Mountain) Pass. This gravel road is a work of art, built in the 1800’s with an intricate draining system and carefully erected walls of stone. It is declared a heritage site, and hopefully will not be tarred soon as it is a heaven for cyclists and motorcyclists. 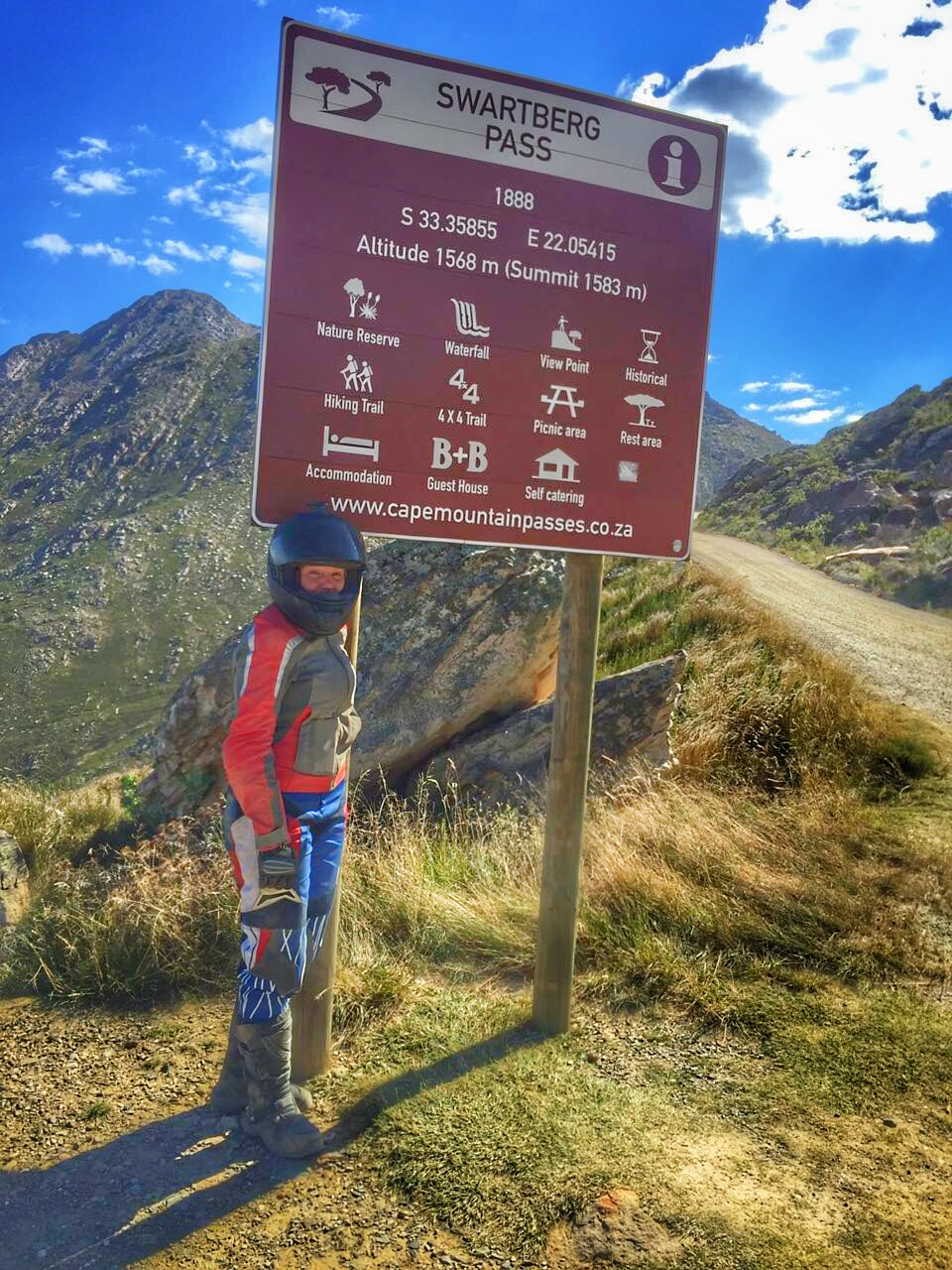 The wind beat at us ferociously as we drove through, and covered us with a thick layer of dust. The path clings to the mountainside, seriously close to the edge and then winds into a deep canyon. We arrived, shaken but happy to Prince Albert, a beautiful holiday village covered in bougainvillea.

Saturday morning rolled around, we took our time at breakfast and then drove through the arid Karoo, past ostrich farms and baboons, into Uniondale from where we left the tar road and headed back to gravel. Prince Alfred pass, leading to Kynsa, is a wonderful road in good condition without many technical parts. We stopped on the way for a drink at a famous camp-site called Angie’s G-spot, known for its hippy spirit,, hot beer and poor service. After about five hours of riding we got to the coastal town of Kynsa.

This morning Uwe and I said goodbye and parted ways. He drove back home and I continued on my own, with mixed emotions about riding solo. I started so early that it was still black as I left Kynsa, but the darkness remained for hours as rain clouds loomed menacingly over me all day. The ride was very different from the previous days. 550 kilometres on tar roads at 120 kph required different kinds of concentration and endurance. I drove along the coast on a series of bridges over countless river mouths, some shallow and wide and some impossibly deep and narrow. During the second half of the day the sun came out and the view became nicer, but strong winds coming from the side threatened the topple me over and I rode slowly. I arrived at East London and began wandering from B&B to hostel to hotel trying to find one with secure parking. What a relief to find a home for the night at last!

Tomorrow I am planning to ride to Coffee Bay along the Wild Coast, then inching further north towards the Drakensberg in the coming days.

I want to say again how grateful I am to all the people who helped me so far; Pan, who hosted me three whole weeks, cooked for me, lent me his motorcycle and became a very good friend, Duncan who assisted me with my paperwork, John and Melissa who gave me lots of good advice and company, Niel, Ronen and others who I met these past weeks. Most of all though to Uwe, a guy who just heard I was doing this trip and then put aside ten whole days from morning to night to help me, drove with me from store to store, made many calls on my behalf, screwed, cut and glued parts on my bike, explained to me everything I needed and gave me gear. He then joined me for five days of great riding, guiding me through hidden trails I never would have discovered with never ending patience. Grateful, I just feel so GRATEFUL.

I’ve been asked many times when explaining my trip how come I am not afraid. If I were to sit and make a list of all the possible worst-case scenario’s then of course I would be overcome with fear. But if I look one step forward and focus on achieving that – it all seems possible. That is not to say I don’t have contingency plans, I do, only that I don’t let my imagination wander into negative places.

I’m also asked often if I don’t feel lonely travelling on my own. Firstly, I have met so many people who have helped me so much that I don’t feel alone. Tonight is actually my first night “alone” in Africa. The other thing is that I am a soloist by nature, I am not afraid of introspection, of talking with myself. I think that people should be able to handle themselves and not rely constantly on external confirmation. 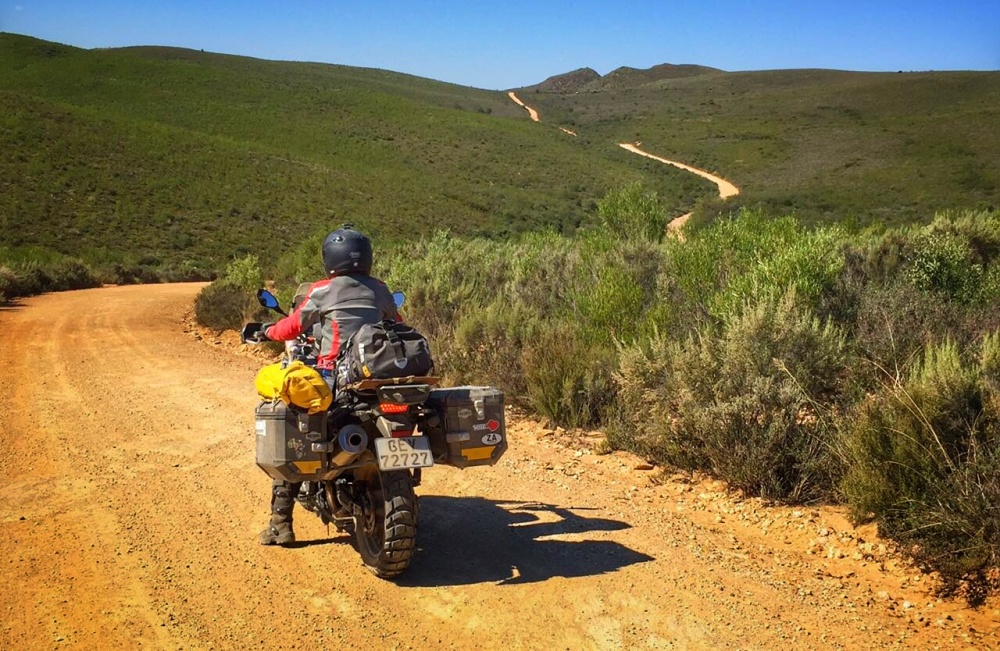